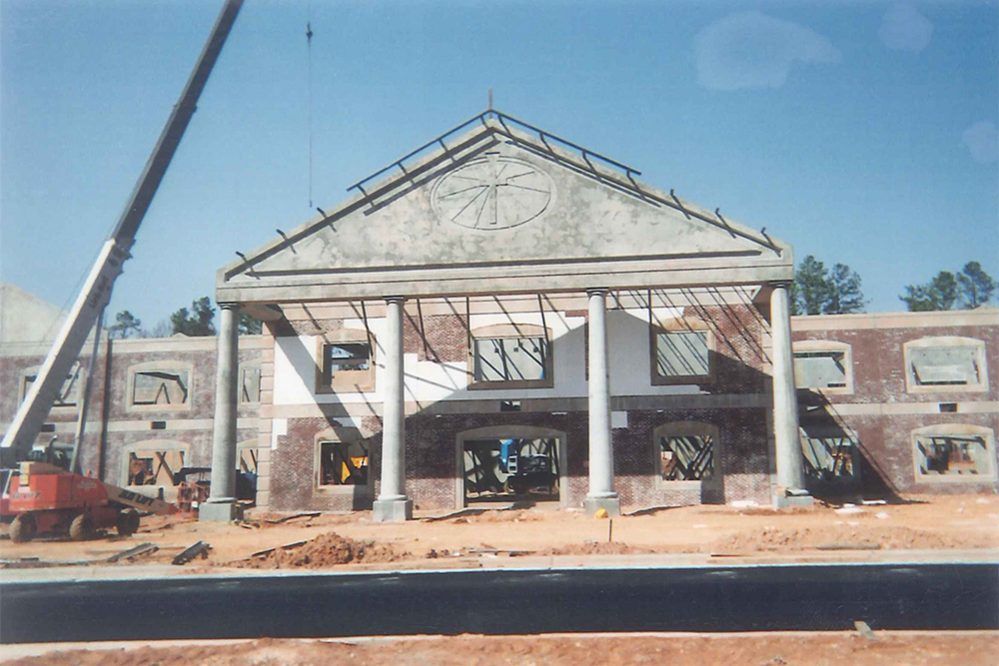 In 1994 a small group of Christian families, troubled by the fact that there were no Christian schools in Cary, decided they needed a better option for educating their children. Eager to provide an education that was both Christian and academically robust, they began meeting together to discuss the formation of a new school. Like hundreds of other families around the country who have started classical Christian schools over the past decades—often initially with more excitement than experience—they discovered a vision for what that education would look like in “The Lost Tools of Learning,” an essay by C.S. Lewis’s friend Dorothy Sayers. Over a period of months, about 150 parents, led by Tim McClelland, gathered regularly to pray and to plan curriculum, finances, and staff for the startup of Cary Christian School. 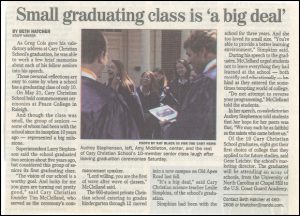 Cary Christian School’s first week was…unique. CCS opened its doors in September 1996 to a group of eighty-four students dressed in brand-new uniforms. They met in trailers, having no permanent space yet available. That same day, Hurricane Fran hit North Carolina, veering unexpectedly toward the Triangle with hundred-mile-an-hour winds. On what would have been the second day of school, millions of North Carolinians were stuck at home without power, fallen trees strewn across yards and roads. Needless to say, students got an early break that year. (When classes resumed a week later, one young student asked, “Are we going to just come to school on Thursdays?”) By God’s grace, the rest of the school year was a success. Two students graduated that spring, and within five years the graduating class had grown to ten.

With a strong commitment to classical Christian education, a place to meet, and committed families, CCS was still a very young school in a crucial stage of growth. In 2001, CCS recruited an experienced classical Christian school administrator, Larry Stephenson, as headmaster. In the following years, God blessed CCS with accreditation through the Association of Classical & Christian Schools (ACCS) and significant numerical growth. In 2012 longtime theology teacher Dell Cook would take on the role of headmaster, followed by Robbie Hinton in 2018, both guiding CCS through crucial developments.

As enrollment increased, the school outgrew its facilities and soon had to separate students into two campuses in space provided by Peace Presbyterian Church and Salem Baptist Church. Plans for a permanent campus were proposed, land was purchased, and construction began on a building on Old Apex Road. In the fall of 2004, classes met in a brand-new school building. The field house was added in 2012, providing a spacious weight and conditioning room for athletes, a concessions area, a multi-purpose room for the band program, and lower-level facilities including locker rooms.

As the school’s facilities grew, so did its sense of community and its traditions. Throughout the years, students have had the opportunity to participate in meaningful and fun events. They have traveled to other states and countries to show the love of Jesus on the Senior Service Practicum, danced at Hoedown, Snowball, and Protocol, and dressed up in creative costumes and played games during Knights’ Fest. This year, we are excited to begin our first annual High School Fall Retreat through which students will start the year by strengthening their relationships and pursuing time for spiritual mentorship and discipleship.

Next week we will open our doors for the twenty-fifth time, welcoming students to the start of a new school year. Over the past quarter of a century more than 700 young men and women have graduated from Cary Christian School. Our graduates are excelling academically in college, serving Christ in many ways, and living well. Some have returned to teach at CCS, while others are now sending their children to CCS. God tells us in Scripture, “Do not despise these small beginnings, for the Lord rejoices to see the work begin” (Zechariah 4:10). We look back at the past twenty-five years with gratitude and humility, eager to see what God has in store for Cary Christian School throughout the next twenty-five. 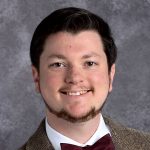