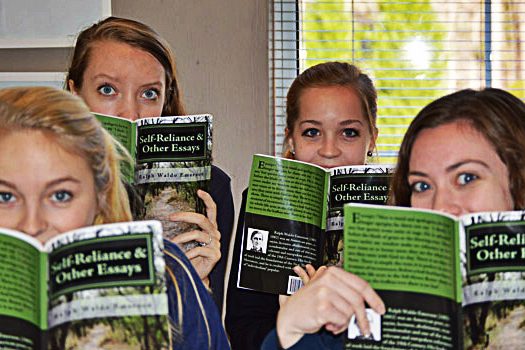 In late August of 1837, Ralph Waldo Emerson delivered an address entitled “The American Scholar” at The First Parish in Cambridge, MA, calling for America to declare literary independence from England and the European literary tradition. In “The American Scholar” Emerson criticizes American society for having come to think of itself-the whole society, that is-as something of a composite human being. The effect of society’s imagining itself this way is that it has divided up its functions among its members: “Man is not a farmer, or a professor, or an engineer, but he is all.” This way of life assumes that each individual human will rely on the others for this or that function in order to complete what is lacking in himself, but Emerson argues that the division of functions in American society has become so specialized that the individual members have been reduced to something related to the human, but less than human. “They have suffered amputation from the trunk, and strut about so many walking monsters-a good finger, a neck, a stomach, an elbow, but never a man.” The farmer becomes so intensely focused on the work of his trade that he “sees his bushel and his cart, and nothing beyond.” Emerson argues the farmer becomes an agricultural functionary instead of a human being doing farm work. The businessman’s soul becomes subject to dollars, “the priest becomes a form; the attorney, a statute-book; the mechanic, a machine.”

On the surface, Emerson is interested in the production of a uniquely American culture, the lack of which is honestly lamentable. But the solution he proposes to the problem proves to be an even more profound benefit. What he wants is for every human being to be truly human. He wants every human being to exercise and express all that he is as an individual human being, and he wants each of us to bring our selves, not simply our skills, to bear on whatever we do. In order for this to happen, though, each of us must be himself, know himself, express himself, as opposed to each of us simply offering his voice as a mouthpiece for whatever has come before. We must each individually do, and think, and be.

Indeed, Ralph Waldo Emerson’s nineteenth century Romanticism is a remarkably unlikely source for a decidedly traditional classical education, but perhaps not for a Christian education. Emerson’s vision for a society of deeply thinking, deeply reflective, deeply experiencing individuals is not at all out of keeping with the society Jesus envisions, especially for society’s moral life. Jesus envisions a society of free, freely thinking people who are not subject to laws, but rather who keep the law because they live beyond the law. In the Sermon on the Mount, Jesus explains that he did not “come to abolish the Law or the Prophets”; he came to fulfill them (Matt 5:17). He goes on to explain that we have broken laws against murder if we even hate; we have broken laws against adultery when we lust. He does not want us to retaliate against our enemies, but he actually wants us to love them and pray for them. He envisions a society of people so morally upstanding, so steadfastly committed to loving others as much as they love themselves (Matt 22:39), that laws against murder or adultery seem silly, even immature. The society Jesus envisions is not free from the law, but beyond the law. Out there, past the law, we are free to love our enemies as much as we can, we are free to care for our wives and our neighbors and our orphans with abandon.

That free life, however, demands responsibility, imagination, creativity. It demands a human being. If no one is going to tell us what to do, if Jesus didn’t pass on to us from the Old Testament, a code of strict laws to abide by in order to be sure we walk uprightly, we are going to have to think-every single one of us. We are going to have to face our lands, face our values, face our problems, and figure out what the loving thing-the selfless thing-to do is. God’s people in the Old Testament were required to build fences around their roofs so that their neighbors’ children would not climb up there, fall off, and hurt themselves. They were also required to forgive those indebted to them every fifty years. Jesus sees these laws as points of beginning-the training wheels for living in a society marked by love. How much more, now that Jesus has taught us, are we able to protect our neighbors’ children from harm, to relieve people of the burden of debt! To live this life beyond the law requires maturity and thoughtfulness. It requires us to think and feel like a human, not simply to farm; to think and feel like a human, not simply to litigate; to think and feel like a human, not simply to think. Emerson’s vision, like Jesus’, is risky. It expects people to encounter life, bring their personality and their character to bear on it, and figure out what to do-this, rather than looking back at a tradition or a law code and conforming to its strict demands. This is the life I envision for the students in my humanities classroom at Cary Christian School. Like Emerson, I want to free them to grow up to be human farmers or human attorneys or human scholars. Like Jesus, I want to free them from the law’s minimal demands and usher them into a life of responsibility and love.